Home > FAQs > Gaming > What to Look for in a Gaming Keyboard

What to Look for in a Gaming Keyboard

Most keyboards don’t look like they’re a major component of a gaming PC rig. They look like, well, keyboards. But don’t let those humble QWERTY keys mislead you. The right keyboard is an essential tool in a gamer’s arsenal, and a purpose-built gaming keyboard goes way beyond letting you hunt and peck – it’s more like hunt, peck, and destroy!

What makes a gaming keyboard so special, and how can you tell which one is right for you? Glad you asked. We’ve assembled an in-depth guide to the world of gaming keyboards, so you can find just the right type for your gaming style.

3 Key Components of a Gaming Keyboard

When choosing a gaming keyboard, there are three major areas of consideration: the size, the “guts,” and customization options.

The first is size. You’ve probably already noticed that some keyboards possess a lot more keys than others. This is especially apparent on laptops, where the size of the screen usually dictates how many buttons will fit on the keyboard.

A “full size” keyboard is one that has 104 (or 105) keys, including the full QWERTY alphanumeric section, a dedicated number pad, dedicated function keys, and a set of four directional cursor keys. Full size keyboards are the widest style, and depending on your work surface, it may be too big. Some gamers find that the number pad puts too much space between the keys they need to use with their left hand and the mouse. But if that number pad is important to you, a full size keyboard is the way to go.

If you can live without the number pad, a “tenkeyless” size is a good choice. It achieves a much smaller footprint on your desktop by dropping the entire number pad section. Everything else remains, including the all-important cursor keys. Most gamers will find the tenkeyless size gives them everything they need.

The second consideration is the guts of the keyboard. By that, we mean the way that the keys register that they’ve been pressed, and how they feel and sound when they’re pressed. Most standard keyboards on the market use a variation on “membrane” technology under each key.

Membrane-based keyboards are inexpensive to make, and allow for very thin designs, thanks to the layer of rubber or silicone that acts as both the “spring” and the electrical contact. Membrane keyboards are highly versatile, but they often lack a distinct “click,” making it hard to know from a tactile point of view if you’ve actually pressed the key fully (and registered that press with the computer). For gamers, this spongy or squishy feel, coupled with a small amount of key travel, simply isn’t accurate enough for their needs.

Mechanical keyboards are a bit of a throwback to keyboard designs from decades ago. Under each of the keys – which tend to be much taller than new keys – is a dedicated mechanical switch. These switches have their own housings, springs, and stems, and provide a click that is both highly audible (some say they’re “clicky”) and highly tactile (you can really feel the moment the mechanism connects with the electrical contact). Mechanical key switches come in three different varieties depending on how much “click” you want, or none at all, and how much spring resistance.

If you take gaming seriously, you’ll probably want a mechanical keyboard if you don’t have one already. They’re not only more precise, and with better feedback, they’re also way tougher than standard keyboards. Most mechanical keys can withstand 40-50 million clicks before needing to be replaced.

The third area is all about how the right gaming keyboard can give you an edge when it comes to speed and your personal preferences. Some gaming keyboards come with a dedicated set of buttons – usually a column on the left side – that can be programmed to execute in-game macros (a pre-defined combination of actions). In complex games like World of Warcraft, you normally have to type a command, or use your mouse to click a specific icon, to fire off a macro. By assigning a macro to a keyboard macro button, a single keystroke is all you need – a huge convenience, especially if reaction times need to be short. Surprisingly, some gaming laptops also offer this feature.

It’s rare when using a keyboard for normal activities, like typing, for several keys to be pressed simultaneously (unless it’s a modifier like the Shift key). When it happens, it’s usually a mistake so it doesn’t matter which of those key presses register with the PC and which don’t. But when you game, it’s a different story -- simultaneous key presses happen all the time, and each key matters.

Gaming keyboards are built to support up to a specific number simultaneous presses, known as “n-key rollover,” where n is the number of keys that can be pressed at the same time. You won’t need a keyboard that can support every single key pressed simultaneously, but the higher that “n” number, the more flexible the gaming keyboard will be. If you use your keyboard for music composition and playback software, or games where two players use the keyboard simultaneously, a high n-key rollover is a must.

Non-gaming keyboards can also suffer from a strange effect known as key ghosting. This happens when you press certain keys simultaneously (or even very quickly one after the other) and the keyboard registers a press on an adjacent key, that you didn’t press at all. Not a big deal when typing an email, but potentially disastrous when gaming!

A good gaming keyboard will have anti-ghosting features, using a specialized wiring pattern to avoid the mixed signals associated with ghosting. Some gaming keyboards isolate specific and popular key zones (like WASD) against ghosting, while others go even further, isolating each and every key.

If you’ve ever seen a gaming keyboard lit up with all of the colors of the rainbow, and thought, “well that’s excessive,” you may be surprised to learn that adjustable keyboard backlights are more than just a wow factor. 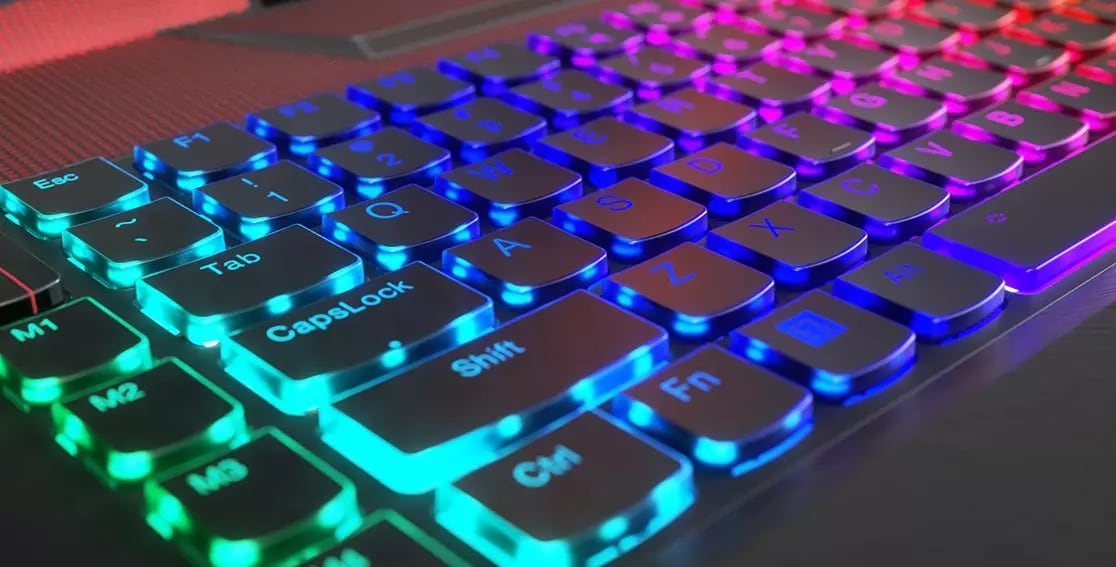 Dividing a gaming keyboard into the most commonly used zones and then lighting these areas with different colors can provide a quick visual reference during game play. The less you have to think about where your fingers need to go, the faster you’ll play.

Extreme examples include being able to select a backlight color for individual keys, but there’s still a benefit to the zone approach. Even a single color backlight, like red, can be beneficial especially if you prefer to game in darkness. A red backlight will give you the illumination you need to see the keys in detail, without forcing your eyes to adjust to a bright light source. Plus, there’s no denying it: Backlit keyboards and mice look really cool.

Where to Start: Legion Gaming Keyboards

As you may have guessed, it’s possible to spend hundreds on a dedicated gaming keyboard. The good news is, you don’t have to. Our Lenovo Legion K500 Gaming Keyboard is packed with all of the features serious gamers need and is priced at under $100. With a fully mechanical build, using high quality switches, it’s perfectly responsive to key presses. It has a 104 key rollover capability, with anti-ghosting built-in. And as a wired keyboard, it supports a USB hub.

If your gaming needs are more casual, our $50 Lenovo Legion K200 Backlit Gaming Keyboard provides critical features like a 12 key rollover, anti-ghosting, and customizable three-zone RGB backlighting. It’s compatible with virtually any computer or operating system, and has a tough, braided USB wire that will stand up to years of use.

PC gaming isn’t like any other computer activity; so don’t limit yourself with a keyboard that isn’t designed for gaming. Owning the right gaming keyboard means pwning your adversaries. Who doesn’t like the sound of that?