ThinkPads that changed the world
Innovation

The way we compute. The way we do business. The way we live our lives. Every time business has gone somewhere new, discovered something different, or done something revolutionary, chances are, ThinkPad was there.

>
Love it. Admire it. Beat the hell out of it.
Trusted Quality

We test Think systems against 12 military-grade requirements and more than 200 quality checks to ensure they function in extreme conditions. From the arctic wilderness to desert dust storms, from zero-gravity to spills and drops, you can trust ThinkPad and ThinkCentre to handle whatever life throws your way—even if it’s a grizzly bear! 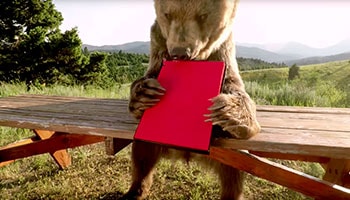 Lenovo presents: Bear vs Box Watch the video >
The journey’s as important as the destination
Purposeful Design

We strive to better serve our customers. We focus on process improvement, so you can focus on achieving results. That legendary little red dot, for example, saves your hand from reaching for a mouse and moving nearly the distance of an Olympic swimming pool over the course of a day. 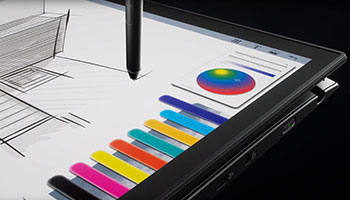 Practical, Powerful & Purposeful. Never Showy. Watch the video >
Think heritage
The world’s #1 business laptop of all time*
Loyal customers have pushed the number of ThinkPad laptops sold to more than 100‑million, while ThinkCentre desktops support professionals across all industries.

A sleeker and lighter version of itself, the ThinkPad X1 Carbon Gen 7 laptop kicks up the style quotient with an optional Carbon-Fiber Weave top cover. We’ve also amped up protection with our built-in suite of ThinkShield security features to safeguard your data. Powered by Intel® Core™ technology, this device delivers high performance—while the 18.3-hour battery life enables easy productivity on the fly.

The ultimate in flexibility

Thinner. Lighter. More secure. The ThinkPad X1 Yoga Gen 4 features the renowned 360-degree hinge to accommodate your style. This 14” 2-in-1 laptop features a built-in suite of ThinkShield security features to protect all your critical data. And with the choice of a 4K display with Dolby Vision™ and Dolby Atmos™ sound system, you can take your creativity—and your entertainment—to new levels.

Available in a range of shapes and sizes, ThinkCentre PCs are powerful workhorses with unique designs. From the 1.1-pound nano to tiny desktops, to traditional towers and small form factor (SFF) PCs, to our elegant all-in-ones (AIO), they’re perfect for work in any environment. And now, featuring our nano IoT desktop with 4G and I/O Box functionality.

Security is in our DNA

At Lenovo, we take security seriously. ThinkShield is our comprehensive portfolio of security offerings based on the latest technology innovations. It's your foundation of defense to help you prevent, detect, and recover from security attacks.

* Based on testing with MobileMark 2014. Battery life varies significantly with settings, usage, and other factors.

Click to review all important information regarding lenovo.com pricing, restrictions, warranties, and more
Digital River Ireland Ltd is the authorised reseller and merchant of the products and services offered within this store.